"The fear of an unjust excommunication should never hinder us from fulfilling our duty...."
Proposition 91 condemned by Pope Clement XI in Unigenitus

On September 8, 1713 Pope Clement XI issued the dogmatic constitution Unigenitus, a document condemning 101 propositions purportedly found in the writings of the French Oratorian priest, Pasquier Quesnel. Issued at the behest of Louis XIV, Unigenitus followed years of contention between the papacy, the French crown, and various ecclesiastical entities tainted by or merely suspected of adherence to questionable theological precepts attributed to Cornelius Jansen, former bishop of Ypres.

Quesnel himself belonged to the new generation of Jansenists.  His Réflexions morales, written in French, had more public impact than Jansen’s abstruse Latin theology. For years Quesnel’s nonconformist, not to say heretical positions, were seen as a threat to Louis XIV’s absolutist government, and when the seizure of Quesnel’s private papers in 1703 revealed his alarming network of Jansenist supporters all over Europe, the king had had enough. In 1705 Louis XIV persuaded the Pope to issue his first anti-Jansenist bull Vineam Domini. This bull was met with defiance in some quarters, and Louis embarked on a policy of repression, but the government’s brutality only sparked further unrest. By 1711 renewed anxiety drove Louis to seek help again from Pope Clement, and Unigenitus was promulgated. The ensuing ecclesio-political crisis shows that once again, both Louis XIV and Pope Clement had miscalculated.

Many of the primary sources for this tumultuous period are represented here in the Clementine Collection of CUA's Rare Books department. Housed in several dozen volumes,  are more than 1,000 pamphlets, manuscripts and broadsides, including papal decrees and royal mandates written in response to Unigenitus and documenting the intense controversy it aroused. The pamphlets were produced by zealots on all sides and in great numbers; according to historian B. Robert Kreiser, over 200 pamphlets were issued on Unigenitus in the year 1714 alone. These works testify to the turbulent decades following the bull’s publication, and to divers factions and competing agenda: the Pope reiterating orthodox teaching; the monarch intent on keeping order; his Jesuit allies determined to crush Jansenism; the theologians of the Sorbonne resisting both papal and regal power; the ambivalent bishops and upper clergy; the increasingly restive lower clergy, (usually impecunious parish priests); the Parlements or magistrates, hostile to papal control of the Gallican church and objecting vehemently to the condemnation of proposition 91 (see above). A majority of prelates (the constitutionnaires) accepted the Bull, but others like Cardinal Noailles, (Archbishop of Paris, and leader of the anti-constitutionnaires) sought modifications from Clement before they would sign. And long after the deaths of Quesnel, Louis, Clement and Noailles, others had taken their places, continuing the pamphlet war with anonymous works, fictitious imprints, and fulminations on complex issues which challenge modern interpretation and hamper cataloging efforts. Despite such challenges and a seriously under-staffed department,  these pamphlets and associated manuscripts are RBSC’s current cataloging priority. The books have been here since 1928, but have received only sporadic attention. In the 1960s several volumes were the subject of library students' master's theses, and they received scholarly treatment from Rev. Prof. Jacques Gres-Gayer, an expert in 18th-century French Catholicism. But outside CUA, these works remain a well-kept secret, chiefly owing to their absence from any online catalog. We hope to remedy this by ensuring that these works are cataloged and available in WorldCat before September 2013, the tri-centennial of the promulgation of Unigenitus.  To meet this deadline may require curtailment of other departmental activities and users are reminded to contact us in advance for an appointment.

Aside from the looming anniversary, other factors make these materials an obvious cataloging priority. Most of the printed works, collected in some 40 volumes known collectively as Miscellanea relativa alla bolla Unigenitus, are unique, with no examples reported even in European libraries. Additionally, the provenance of our volumes adds to their scholarly value, for the Miscellanea are pamphlets and manuscripts collected by the family of Pope Clement XI, and the volumes were assembled in and for the Albani library. As such, they offer a unique window into the mind of Clement and his circle, and testify to his family’s organizational methods. They are veritable filing cabinets in book form (often with 40 or more titles bound together), still in their original bindings of vellum and block-printed paper. Many pamphlets bear the pen marks of careful reading, while others show folds, perhaps from being carelessly shoved into the pocket of an eighteenth-century cassock. A number are presentation copies, dedicated to Pope Clement or to members of his family. All the containing volumes were bound to order, with letterpress spine labels and manuscript title pages. As the books are cataloged, more information will be made available on the contents, the bibliographic features, and the organizational principles inherent in these volumes. 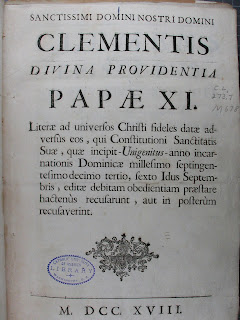 The first of more than 1,000 18th-century works related to Unigenitus, this pamphlet contains the text of Clement's Pastoralis officii, a condemnation of the French bishops who appealed against Unigenitus to a general council. 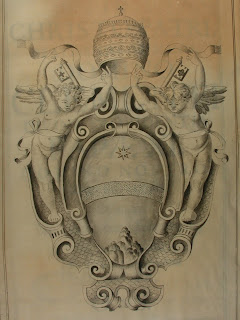 This water-color drawing of Clement XI's
coat of arms serves as the cover to a special presentation copy for the pope of a 1717 doctoral thesis by a theological student of Coimbra, Portugal. 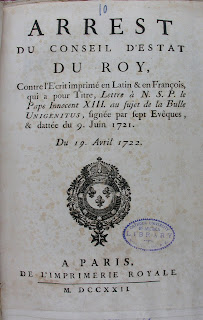 The French government's 1722 condemnation of the bishops' appeal against Unigenitus, printed by the famed Imprimerie Royale. 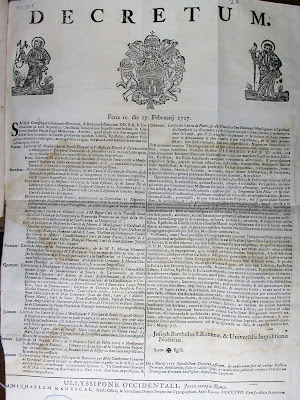 One of numerous broadsides, folded into a volume of the Miscellanea,
this Lisbon imprint of 1717 contains a condemnation by the Roman
Inquisition of various French books hostile to Unigenitus.
Posted by Curatrix at 12:11 PM

Curatrix
Curatrix is the nom-de-keyboard of Lenore Rouse, the Rare Books and Special Collections department curator who is responsible for the content of these pages and welcomes all comments and corrections thereon. The views expressed in this blog are her own and do not represent the views of The Catholic University of America.